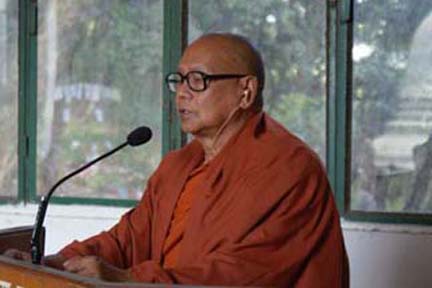 Bhante Ashwaghosh, the Most Venerable Sanghanayaka (Chief Prelate) of the Bhikkhu Sangha of Nepal completes his 89th birthday this month. His disciple monks, devout nuns and laity celebrate his birthday on Saturday the 30th May at Sangharama Buddhist Vihara in Kathmandu. The Vihara popularly known as Sangharama (Residence for Sangha, the Bhikkhus) is located in Dhalko facing the Ajima temple in the Bhagavati holy area divided by Vishnumati river is set to attract hundreds of Buddhist devotees and friends of Buddhism on Saturday to join the birthday celebration of this senior most Buddhist monk of the Theravada school of Buddhism in Nepal.

For the Buddhist world, the term Bhante and his name Ashwaghosh is enough to understand who he is. As noted above, he is the senior most Theravada monk in Nepal today. He holds the highest ranking position, the Sanghanayaka (Chief Prelate) in the Bhikkhu Order of this country. He has achieved this highest position through his dedicated services contributing to promote spirituality and peace in Nepal’s Buddhist society. As an individual, he believes in self-sacrifice for both the socio-economic progress and spiritual development of people and the society. He has dedicated his whole life to teach the value of peace among the community made up of ethnic and religious diversity. Since he became a monk at the age of 18, he has continued to serve the Buddhist community in Nepal even at his age of 89 today.

As a Buddhist monk, Bhante Ashwaghosh is respected not only by his disciple Buddhist monks, nuns and the laity but also by high ranking officials, heads of the Government and the State in Nepal and abroad. King Birendra honored him with the title “Gorkha Dakshinabahu” for his yeomen service provided to the development of spiritual understanding and peace among the people of Nepal. He has taught the Dhamma (teachings of the Buddha) and personally supervised the wellbeing of the students of Ananda Kuti Vidyapeetha, the first high school established at Swayambhu, Kathmandu. He also established Dhyanakuti, the first meditation center in the country at Banepa for promoting internal peace in individuals by self-practicing and teaching moderation and nonviolence to the people in the community without any socio-religious discriminations.

Bhante Ashwaghosh is also credited for establishing the first ever Bhikkhu training center in Nepal. His center, where he is resident now has produced many Nepalese monks. Thanks to his kindness and friendship towards his fellow monks, nuns and the laity, consistency in his words and deeds and his modest way of life, he has become the most respected Bhikkhu in our country. Several of his monk disciples teach Buddhism sharing the message of peace taught by the Buddha in Nepal and abroad. His exemplary life style has attracted not only general laity but also socio-political leaders in Nepal. The Communist Party of Nepal (United Marxist and Lenin) appointed him to represent the Buddhist community in the Parliament of Nepal in 1990 making him the first ever Buddhist monk parliamentarian. In 1995, Prime Minister Man Mohan Adhikari also appointed him to be the Vice Chairman with executive power in the Lumbini Development Trust (LDT). The LDT is a Government agency formed to develop the Sacred Garden of Lumbini, where the Buddha, the proponent of the world peace was born.

Bhante Ashghosh Mahathero, the chief prelate of Nepal has not only led a moderate life style but also contributed immensely to the spiritual development of his community and to promote peace among everyone that comes into contact with him for the past six decades. Organizations such as Dharmodaya Sabha, the first and foremost Buddhist organization in Nepal and many laity have been benefitted from his teachings and leadership when he was the President of Dharmodaya Sabha for a three year term in the past.

Born as the second son of a Sakya family of Mr. Chandrajyoti and Mrs. Laxmimaya on May 18, 1926 in Yala (one of the three main cities of Kathmandu Valley), he was named as Buddha Ratna by his parents. But he left his home at the age of 18 to take refuge in the Buddha’s teachings. He left his home, his parents, one elder brother, two sisters and his young wife to become a celibate monk in January 1944. Having trained as a monk under the most Venerable Bhante U Chandamuni Mahathero of Burma (1876-1972 AD) in Saranath, India and later under the the most Venerable Bhante Dhammawasa Mahathero of Matara, Sri Lanka (1888-1949 AD), young Bhante Ashwaghosh gained a profound knowledge of Buddhism, in which he found personal peace and life tranquility. Bhante Ashwaghosh has shared the message of peace taught by the Buddha with the community that came into contact with him for the past six decades. His role to spiritual development among the community he has served is tremendous. Personally, my parents, my brother and sister and my own family have been benefitted by kind sharing of his highly informed spirituality for the past five decades.

Bhante Ashwaghosh shared his informed spiritual knowledge through highly valuable activities through formation of youth organizations, preaching and writing and publishing books of Buddha’s teaching of peace. No sooner, he returned to Nepal in 1961 after his training in Buddhism in India and Sri Lanka, he formed Nepal Yuwak Bauddha Parishad (Nepalese Association of Buddhist Youth) in Kathmandu. The youth organization with his advice launched an initiative to eradicate caste discrimination and pseudo beliefs among the community in Kathmandu valley that included three major cities of Yen (Kathmandu), Yala (Lalitpur) and Khopa (Bhaktapur). The youth organization made up of first batch of 80 members organized first awareness program for amity between different cast groups in Nuwakot, a historical town outside the Kathmandu valley. The group’s awareness program spread to many villages and towns in Nepal and extended even to Sikkim in India. People of these areas were highly benefitted by the leadership of Bhante Ashwaghosh and preaching of his profound knowledge of spirituality.

Other powerful way of his contribution to make the community aware of the way of peaceful life was his writing about the doctrine of the Buddha. Starting with his first essay titled “Preman he jaka dukha biigu khah (Only lust suffers us)” in the Dharmaduta Buddhist monthly of India Volume No.109 in 1944, he has written hundreds of articles to several Buddhist magazines and books on spirituality for peace. His latest book titled “Buddhist Insight Meditation” (translated into English by Bhikkhu Upatissa) completed the 150th number by the end of 2014. He has written these books on Gotama Buddha, His Teachings about morality, love, kindness and peace in Nepal Bhasa and Nepali languages and several of them have been translated into English. He has also edited two major Buddhist monthly journals – Ananda Bhoomi and Dharmakirti for the past three decades. His knowledge of Buddhism and meditation has earned him honors from abroad, too. In 2003, the Government of Myanmar honored him with the title of Agga Maha Saddhamma Jotikadhaja (Superior preacher of the doctrine of the Buddha) in Yangoon. The Bhikkhu Order of Sri Lanka followed suit to honor him with another honorary title of Buddha Janmabhoomi Jotaka Sasana Kitti Siri (Master of the Bhikkhu Order in the land of Buddha’s Birth).

As the first ever monk to represent in the Parliament of Nepal,  Bhante Ashwaghosh also preached the message of peace in the Parliament, and pointed out the need to build Nepal into a peaceful country and promote harmony among the people made up of different ethnicity, culture and religions. Another important initiative he has taken was to preach religious tolerance among inter-religious community at home and abroad. At the age of 89, Bhante Ashwaghosh is still energetic and all ready to share his profound knowledge of spirituality. His disciples, devout nuns and the laity deserve my hearty gratitude for celebrating his Birthday to thank and show gratitude for his six decades long service for the spiritual development of men and women in Nepal. May I extend my heartiest congratulations on his happy birthday for the best of health and longevity and thank for the great contributions he has made for the cause of spiritual development of Nepal and its people. .